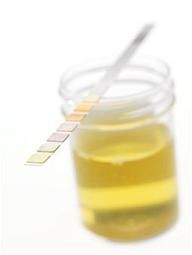 A new urine test can help aid early detection of and treatment decisions about prostate cancer, a study from the University of Michigan Comprehensive Cancer Center and the Michigan Center for Translational Pathology finds.

The test supplements an elevated prostate specific antigen, or PSA, screening result, and could help some men delay or avoid a needle biopsy while pointing out men at highest risk for clinically significant prostate cancer.

The test looks for a genetic anomaly that occurs in about half of all prostate cancers, an instance of two genes changing places and fusing together. This gene fusion, TMPRSS2:ERG, is believed to cause prostate cancer. Studies in prostate tissues show that the gene fusion almost always indicates cancer. But because the gene fusion is present only half the time, the researchers also included another marker, PCA3. The combination was more predictive of cancer than either marker alone.

Results of the study appear Aug. 3 in Science Translational Medicine.

“Testing for TMPRSS2:ERG and PCA3 significantly improves the ability to predict whether a man has prostate cancer,” says lead author Scott Tomlins, M.D., Ph.D., a pathology resident at the U-M Health System. “We think this is going to be a tool to help men with elevated PSA decide if they need a biopsy or if they can delay having a biopsy and follow their PSA and urine TMPRSS2:ERG and PCA3.”

The researchers looked at urine samples from 1,312 men at three academic medical centers and seven community-based hospitals. The men all had elevated PSA levels and had gone on to receive either a biopsy or prostatectomy, surgery to remove their prostates. The researchers evaluated the urine samples for TMPRSS2:ERG and PCA3 and stratified patients into low, intermediate and high scores, indicating their risk of cancer. They then compared this to biopsy results.

“Many more men have elevated PSA than actually have cancer but it can be difficult to determine this without biopsy. This test will help in this regard. The hope is that this test could be an intermediate step before getting a biopsy,” says senior study author Arul Chinnaiyan, M.D., Ph.D., director of the Michigan Center for Translational Pathology and S.P. Hicks Professor of Pathology at the U-M Medical School. Chinnaiyan is also a Howard Hughes Medical Institute researcher.

Prostate biopsies are done with a needle in an office setting, but they do pose some discomfort and risk to the patient. In addition, a biopsy can offer an incomplete picture since urologists are testing the prostate as a whole, rather than a specific lesion.

The combined TMPRSS2:ERG and PCA3 test is not yet available as a prostate cancer screening tool. The Michigan Center for Translational Pathology is working with Gen-Probe Inc., which has licensed the technology, and hopes to offer it to U-M patients within the year. U-M currently offers PCA3 screening alone as follow-up to elevated PSA. Men with questions about prostate cancer screening should speak to their doctors or call the U-M Cancer AnswerLine at 800-865-1125.

Prostate cancer statistics: 217,730 Americans will be diagnosed with prostate cancer this year and 32,050 will die from the disease, according to the American Cancer Society

Disclosure: The University of Michigan and Brigham and Women’s Hospital have been issued a patent on the detection of ETS gene fusions in prostate cancer, on which Tomlins, Rubin, Rhodes and Chinnaiyan are listed as co-inventors. The diagnostic field of use has been licensed to Gen-Probe. Chinnaiyan has served as a consultant to Gen-Probe. Fradet is co-founder of Diagnocure, which licensed diagnostic rights to the PCA3 gene to Gen-Probe.