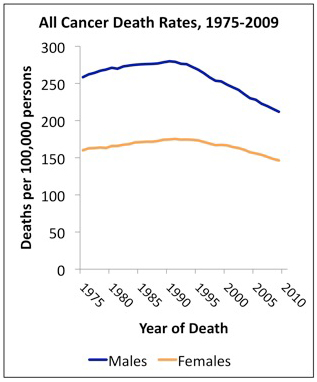 The Annual Report to the Nation on the Status of Cancer, 1975–2009, shows that overall cancer death rates continued to decline in the United States among both men and women, among all major racial and ethnic groups, and for all of the most common cancer sites, including lung, colon and rectum, female breast, and prostate. However, the report also shows that death rates continued to increase during the latest time period (2000 through 2009) for melanoma of the skin (among men only) and for cancers of the liver, pancreas, and uterus. The special feature section on human papillomavirus (HPV)-associated cancers shows that incidence rates are increasing for HPV-associated oropharyngeal and anal cancers and that vaccination coverage levels in the U.S. during 2008 and 2010 remained low among adolescent girls.

The report, produced since 1998, is co-authored by researchers from the American Cancer Society (ACS), the Centers for Disease Control and Prevention (CDC), the National Cancer Institute (NCI), and the North American Association of Central Cancer Registries (NAACCR). It appears early online in the Journal of the National Cancer Institute and will be published in print issue 3, volume 105.

The decline in overall cancer death rates continues a trend that began in the early 1990s. From 2000 through 2009, cancer death rates decreased by 1.8 percent per year among men and by 1.4 percent per year among women. Death rates among children up to 14 years of age also continued to decrease by 1.8 percent per year. During 2000 through 2009, death rates among men decreased for 10 of the 17 most common cancers (lung, prostate, colon and rectum, leukemia, non-Hodgkin lymphoma, kidney, stomach, myeloma, oral cavity and pharynx, and larynx) and increased for melanoma of the skin and cancers of the pancreas and liver. During the same 10-year period, death rates among women decreased for 15 of the 18 most common cancers (lung, breast, colon and rectum, ovary, leukemia, non-Hodgkin lymphoma, brain and other nervous system, myeloma, kidney, stomach, cervix, bladder, esophagus, oral cavity and pharynx, and gallbladder) and increased for cancers of the pancreas, liver, and uterus.

“The continuing drop in cancer mortality over the past two decades is reason to cheer,” said John R. Seffrin, Ph.D., chief executive officer of the American Cancer Society. “The challenge we now face is how to continue those gains in the face of new obstacles, like obesity and HPV infections. We must face these hurdles head on, without distraction, and without delay, by expanding access to proven strategies to prevent and control cancer.”

Between 2000 and 2009, overall cancer incidence rates decreased by 0.6 percent per year among men, were stable among women, and increased by 0.6 percent per year among children (ages 0 to 14 years). During that time period, incidence rates among men decreased for five of the 17 most common cancers (prostate, lung, colon and rectum, stomach, and larynx) and increased for six others (kidney, pancreas, liver, thyroid, melanoma of the skin, and myeloma). Among women, incidence rates decreased for seven of the 18 most common cancers (lung, colon and rectum, bladder, cervix, oral cavity and pharynx, ovary, and stomach), and increased for seven others (thyroid, melanoma of the skin, kidney, pancreas, leukemia, liver, and uterus). Incidence rates were stable for the other top 17 cancers, including breast cancer in women and non-Hodgkin lymphoma in men and women.

“While this report shows that we are making progress in the fight against cancer on some fronts, we still have much work to do, particularly when it comes to preventing cancer,” said CDC Director Thomas R. Frieden, M.D. “For example, vaccinating against HPV can prevent cervical cancer, but, tragically, far too many girls are growing into adulthood vulnerable to cervical cancer because they are not vaccinated.” 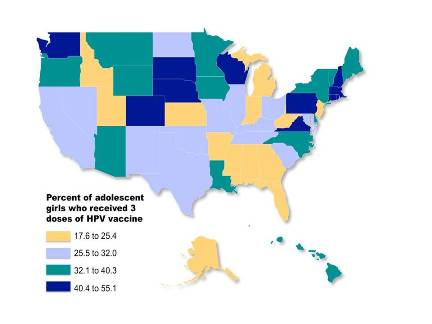 The special feature section of the report includes an evaluation of the burden and trends in HPV-associated cancers as well as HPV vaccination coverage levels among adolescent girls. The report shows that from 2000 through 2009, incidence rates for HPV-associated oropharyngeal cancer increased among white men and women, as did rates for anal cancer among white and black men and women. Incidence rates for cancer of the vulva increased among white and black women. Rates of cervical cancer declined among all women except American Indian/Alaska Natives. In addition, cervical cancer incidence rates were higher among women living in low versus high socioeconomic areas. Among men, rates for penile cancer were stable.

“This year’s Report correctly and usefully emphasizes the importance of HPV infection as a cause of the growing number of cancers of the mouth and throat, the anus, and the vulva, as well as cancers of the uterine cervix, and the availability of vaccines against the major cancer-causing strains of HPV” said NCI Director Harold Varmus, M.D. “But the investments we have made in HPV research to establish these relationships and to develop effective and safe vaccines against HPV will have the expected payoffs only if vaccination rates for girls and boys improve markedly.”

The report also showed that in 2010, fewer than half (48.7 percent) of girls ages 13 through 17 had received at least one dose of the HPV vaccine, and only 32 percent had received all three recommended doses. Vaccination series completion rates were generally lower among certain sub-populations, including girls living in the South, those living below the poverty level, and among Hispanics. The national three-dose coverage estimate among girls ages 13 through17 in 2010 falls well short of the U.S. Government’s Healthy People 2020 target of 80 percent for three-dose coverage among girls ages 13 through15, and is much lower than vaccination rates reported in Canada (50-85 percent) and the United Kingdom and Australia combined (greater than 70 percent). The authors note that low overall vaccine uptake in the U.S. is likely due to a number of issues, including inadequate provider recommendations, provider reimbursement concerns, infrequent use of reminder/recall systems that would foster completion of the three-dose series, and other factors.

“As incidence rates for some HPV-associated cancers continue to rise,” noted NAACCR director Betsy Kohler, “these cases will contribute to the overall growing number of cancers associated with population aging and expansion, requiring additional resources for medical research and treatment, in addition to our careful tracking of these trends.”