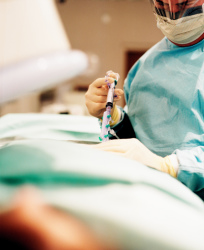 Some of the most aggressive forms of breast cancer are more vulnerable to chemotherapy when it is combined with a new class of anti-cancer agent, researchers from the Walter and Eliza Hall Institute have shown.

ABT-737 is one of a new class of anti-cancer agents called BH3 mimetics that target and neutralise the so-called Bcl-2 proteins in cancer cells. Bcl-2 proteins act to ‘protect’ the cells after they have been damaged by chemotherapy drugs, and prevent the cancer cells from dying.

Professors Geoff Lindeman and Jane Visvader, who led the research with colleagues Dr Samantha Oakes and Dr François Vaillant from the institute’s Stem Cells and Cancer division, said that the BH3 mimetics showed promise for treating breast cancers, including ‘triple negative’ cancers. Their research is published in the Proceedings of the National Academy of Sciences.

Triple negative breast cancers are so-called because they test negative for oestrogen, progesterone and HER2 receptors, and cannot be treated with hormone therapy or trastuzumab. They account for up to 20 per cent of all breast cancers and are typically aggressive with a poor prognosis.
Dr Lindeman said that early results suggest navitoclax (an orally-available BH3 mimetic) could provide new hope for treating some breast cancers that are not candidates for other currently available treatments.

“ABT-737 targets proteins from the Bcl-2 family, which are found at high levels in up to 70 per cent of breast cancers,” Dr Lindeman said. “We have shown that breast tumours that have high levels of Bcl-2 respond well to treatment with ABT-737 when used in combination with a conventional chemotherapy drug.”
ABT-737 and navitoclax were discovered by Abbott scientists and are based on the discovery made at the Walter and Eliza Hall Institute in the 1980s that Bcl-2 is a ‘pro-survival’ protein responsible for preventing cell death in healthy and diseased cells. ABT-737 and navitoclax are not yet available for patient treatment, but navitoclax is currently in phase II clinical trials to establish its efficacy in treating some types of leukemia and lymphoma. Navitoclax is being jointly developed by Abbott and Genentech, Inc.

Dr Visvader said combined treatment with ABT-737 and docetaxel (a commonly used chemotherapy drug for treating breast cancer) in mice transplanted with human breast cancer cells improved tumour response and survival rates, when compared to docetaxel as a single agent. ABT-737 alone was not effective in treating cancers with high levels of Bcl-2, nor was it effective in treating cancers that did not express Bcl-2.

“The research suggests that these agents make the cancer cells more vulnerable to chemotherapy,” Dr Visvader said. “We are particularly excited that the research shows a good response in Bcl-2-expressing breast cancer, including basal-like breast cancer, which is often the most aggressive and hardest to treat.”
Dr Lindeman said the research could lead to the development of new treatment regimens that make resistant and difficult-to-treat breast cancers more vulnerable to conventional chemotherapy treatments. “We have had a good result in pre-clinical models of disease, but we are still a way off this being used in humans,” Dr Lindeman, who is also an oncologist at The Royal Melbourne Hospital, said. “We hope that these results could see a clinical trial of navitoclax for treating breast cancer with high Bcl-2 levels within the next few years.”