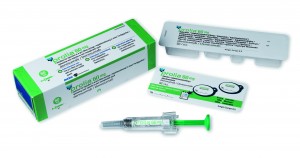 The FDA has approved the osteoporosis drug Prolia as a treatment for some breast and prostate cancer patients whose bones have been weakened by certain hormone therapies for cancer.

The drug’s manufacturer, Amgen Inc., says studies showed that Prolia improved bone mass and reduced the occurrence of new spine fractures in men with prostate cancer receiving androgen deprivation therapy and who did not have cancer spread to the bone. It also increased bone mass in women being treated with aromatase inhibitors for breast cancer.

The company says in a news release that Prolia is the “first-and-only” therapy approved by the FDA for cancer treatment bone loss in patients who have undergone hormone therapy.

In 2010, the FDA approved Prolia to treat osteoporosis in postmenopausal women at high risk for fracture. The agency’s latest actions amount to approval for two more uses for the drug.

Now the drug may also be used in women receiving aromatase inhibitor therapy for breast cancer — and in men with prostate cancer receiving androgen deprivation therapy — who are at high risk for fracture, the company says.

Aromatase inhibitors often are used in patients with breast cancer to prevent recurrence of the disease. Androgen deprivation therapy is used in men with prostate cancer to prevent or control recurrent disease.

The FDA says Prolia has the same active ingredient, denosumab, as Amgen’s drug Xgeva, which is used to prevent bone complications such as fractures in people with tumors that have spread to the bone.

Approval for the new uses for Prolia were based on results of separate studies involving 1,468 men with prostate cancer and 252 women with breast cancer.

Prolia is given as an injection under the skin every six months. Reported side effects include low blood levels of calcium, joint pain, and back pain.

“Bone loss and fractures are recognized effects of hormone ablation therapies, but we have not had an approved treatment option to prevent these problems from our patients,” Matthew Smith, MD, PhD, of Massachusetts General Hospital, says in Amgen’s news release. “Prolia now gives us the ability to reduce the risk of bone loss and fractures, allowing patients to continue their treatment and their fight against cancer.”