Cancer is the uncontrolled growth of cells in the human body caused by various agents, but mostly through smoking, exposure to radiation and in some cases, it is hereditary. The cancer starts off with one cell in the body being affected and then spreading to a various group of cells that continue to grow by mutating the DNA. There are several common types of cancer, each affecting a different organ or system in the body. Read on to find out about the most common types of cancer.

As the name suggests, this type of cancer affects the breasts, especially in women. The breasts comprise of lobes and ducts which give them the functionality and structure. The lobes are made of smaller structures called lobules and the entire inner tissue of lobes, lobules and bulbs are interconnected by a series of ducts. Breast cancer begins by affecting the cells in the ducts and sometimes the lobes. Among these two, the former is more common.
There are several factors that cause breast cancer. Among them, the most common ones, after various studies seem to be early menstruation, late childbirth, radiation therapy to the chest, family history of breast cancer. It can also be caused by mutated genes i.e. no specific cause but happens by a random chance or selection. 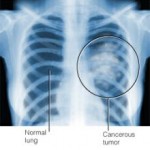 The primary organs affected by this type of cancer are the lungs, which work the breathing and respiration processes in the human body. There are several causes for this type of cancer among which, smoking is the most common, followed by inhaling of asbestos. In addition, it can be genetic. The cause varies from person to person but the effect is the same. The lungs begin to progressively get infected by the cancer and it can spread to neighboring areas as well.
While cancer in itself is not immediately fatal, there is a possibility of other infections due to various secretions, competition from the mutated cell and in some cases, physical factors such as the blockage by various tumors. Currently, lung cancer is one of the most worrying types as only 14% of those diagnosed with it live up to 5 years after the onset. 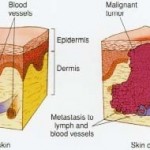 In this type of cancer, the cells which give the skin its color, the melanocytes, turned malignant. These cells are in the lower part of the epidermis layer i.e. the cancerous cells are quite well embedded into the skin layer. Skin cancer can infect any part of the body (from neck to the soles) and is usually characterized by the onset of multiple moles, irritable patches and the like. Moreover, it is commonly caused by tanning with artificial light, which is best avoided.